This week’s blog is from the Journal of the Native Orchid Society of South Australia, Volume 42 No 8. Leo Davis has been doing a series of articles aimed at helping members learn how to identify the orchids.

This article is about Plumatichilos, one of the segregate genera of Pterostylis. It has an unique labellum which sets it apart from the other Greenhoods. Leo wrote this article soon after David Jones named them in the Australian Orchid Review.  Will these names be accepted or not is a matter of waiting and seeing but it should be noted that they have been in manuscript form for many years. At the time of writing, they are not in the South Australian eflora.

Both the species discussed in Leo’s articles are from the Plumatiochilos plumosum complex or group.

Unless otherwise noted, all images are Leo Davis.

Back in 1990 Bates & Weber placed all greenhood orchids in genus Pterostylis(1. pp118-143) where some of you and all Australian State Herbaria and certainly Janes & Duretto (3. pp260-269) would have them still be.  In 2001 Szlachetko erected the genus Plumatichilos.  In his Guide(4. pp286-339), Jones divided the greenhoods into 16 separate genera, these in two groups, each of eight genera.  One group all have the lateral sepals directed downwards (including Bunochilus and Urochilus) and the other eight all have them directed upwards (deflexed, as in Diplodium and Pterostylis).  Even those of you who reject the splitting and creation of the extra genera will concede that those placed in Plumatichilos, which have downward directed and partly fused lateral sepals (forming a synsepalum), are strikingly different in appearance to any other Pterostylis species.  The most obvious distinguishing features are the unique labellum and the two openings to the galea.

I had no idea what ‘barrier trichomes’ were but I saw that Jones listed them as the last of 13 dot pointed characters of genus Plumatichilos(5. p26).  Trichome simply means a hair growing from a plant epidermis.  They can be unicellar or multicellular and branched or unbranched.  The ‘barrier’ refers to its capacity to block and direct a pollinating insect to an exit path that puts it in the right posture to transfer a pollinium to the stigma (sticky receptive female part of flower).

As with all ‘true’ Pterostylis, the dorsal sepal and the two lateral petals, of the upside down flowers, are formed into a galea or cap (Fig. 1).  They are fused so closely that it can be hard to discern the join between the sepal and the comparatively small petals, especially in some less clearly striped flowers. (Figs. 1 & 2).

In Fig. 5, I think that you can see that the hairs arise, in two parallel rows, not paired, from the sides of the flattened shaft of the labellum filament.

Other articles about Plumatochilos can be found here and here. 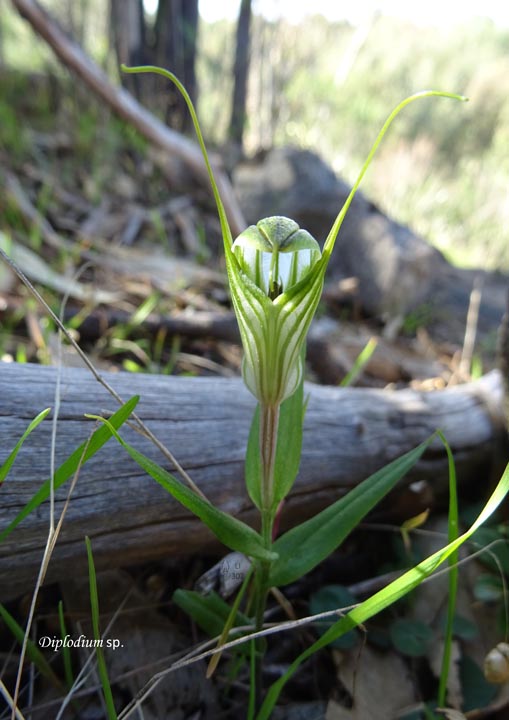