Here in South Australia we often have only one or two species of a complex or a genus but this is not necessarily the case in the rest of the country. One such instance is Urochilus sanguineus (syn Pterostylis sanguinea) or Maroon Banded Greenhood. It is possible that we may have a subspecies or possibly the Mallee form but nothing like the occurrence of  this species in Western Australia where it is but one of many in a complex of several – the Pterostylis vittata complex or Banded Greenhoods*.

Below, with permission, is Andrew Brown’s post on Facebook with notes and images about the complex as it is understood in Western Australia.

Members of this complex grow 150 to 450 mm high and have up to 20 green, brown or reddish-brown white banded flowers characterised by their, short, broad lateral sepals which are joined at the base and a small, insect-like labellum which flicks up when touched. In all species, flowering plants lack a basal rosette of leaves while non-flowering plants have a flattened, ground hugging, rosette of leaves.

Banded greenhoods are found over a wide geographic range between Binnu north of Geraldton and Eyre on the Great Australia Bight, growing in shrublands, woodlands, forests and shallow soil pockets on granite outcrops.

All are winter flowering.

Distinguished from other members of the complex by its prominently cupped lateral sepals and the upturned projection near the base of the labellum. Found between Bindoon and Mt Barker. 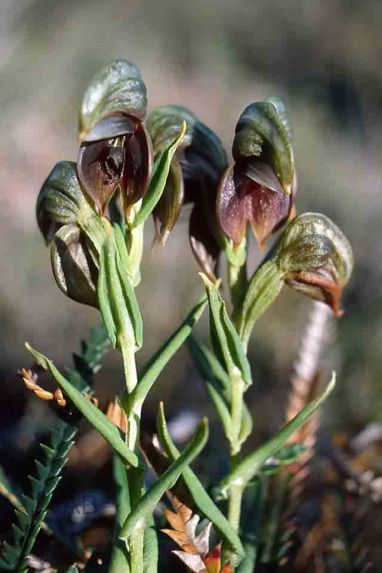 Distinguished from the similar Pterostylis sanguinea by its often shorter stature and slightly larger flowers which are crowded in a dense spike near the top of the stem. Found on the Darling Scarp near Perth.

A very common species that is also found in South Australia, Tasmania and Victoria. It was named from specimens collected in South Australia. The species is similar to Pterostylis crebriflora but is usually taller with smaller, more widely spaced flowers. Flower colour is variable and it is not uncommon to find brown and green flowered forms growing alongside one another. Found over a wide area between Mullewa and Eyre on the Great Australian Bight. 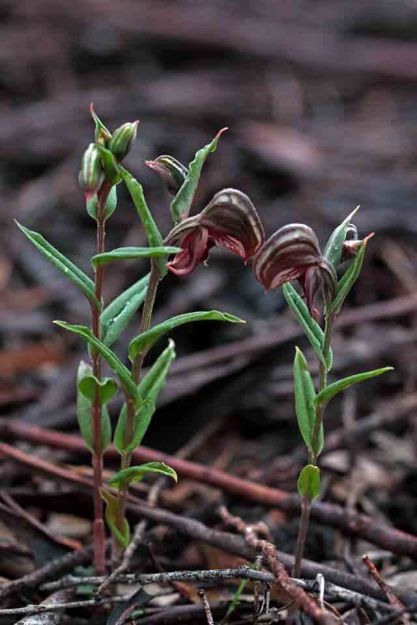 An unnamed member of the complex distinguished from Pterostylis sanguinea by its short stature and few flowered inflorescence. Found over a wide range from the Stirling Range to the north of Esperance.

Some consider this to be a form of Pterostylis sp. small bands but it is usually taller with more widely spaced flowers. The sepals are also narrower and often slightly cupped. Found mostly in near coastal areas between Dongara and Bunbury. Similar looking plants have also been found further inland between Brookton and Mt Barker.

A common, widespread species, distinguished from other members of the complex by its smaller flowers and fleshy, tri-lobed, frog-like labellum. Found over a huge geographic range between Northampton and Mt Ney, north of Esperance. 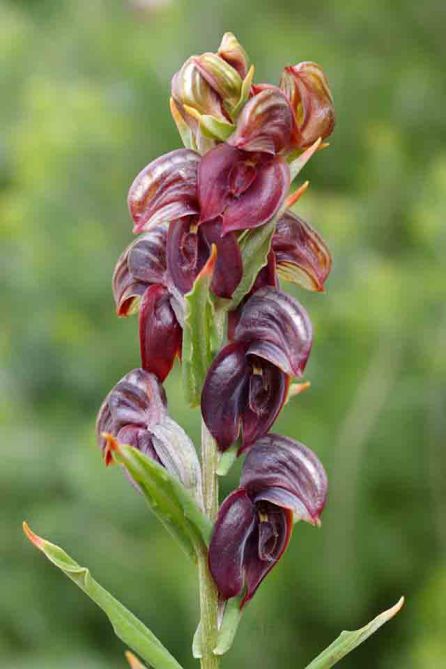 A widespread species named Urochilus atrosanguineus in June 2017. Distinguished from the similar Pterostylis sanguinea by its more robust habit and larger dark reddish-brown flowers. It is also similar to Pterostylis crebriflora but generally flowers earlier and has more widely spaced flowers in a longer spike. Found between Wongan Hills and Katanning with rare, scattered populations on the Swan Coastal Plain.

A distinctive member of the complex distinguished from others by its pale coloured flowers. Like Pterostylis sanguinea (mallee form) it has a short stature and few flowered inflorescence. Found along the coast between Toolinna Cove and Eyre on the on the Great Australian Bight.

A northern species named Urochilus orbiculatus in June 2017. It is regarded by some researchers to be a form of Pterostylis sp. coastal but is usually shorter with a more densely crowded spike of flowers. Its sepals are also broader, more rounded and flattened rather than slightly cupped. Found north of Perth between Cataby and Binnu.

A widespread species distinguished from other members of the complex by its less fleshy, paler coloured, predominantly green flowers and narrower, elongated, slightly cupped sepals. The flowers also have a more translucent appearance. The typical form is found between Bindoon and Balladonia. There is a northern form with a shorter spike of often fawn coloured flowers found between Cataby and Binnu.

It should be noted that in South Australia and Victoria U. sanguineus was originally called P. vittata but that species is now recognised as being endemic to Western Australia.

*As an aside, the common name Banded Greenhoods is used in South Australia for the subgenus Bunochilus (previously Pterostylis longifolia which is now considered endemic to New South Wales).