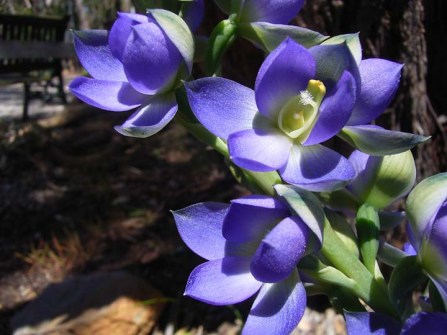 This month’s theme for the photo competition was blue and white. White flowers can occur as a result of lack of colour such as Rosalie Lawrence’s Caladenia latifolia (Pink Fairies) which is normally pink. White orchids can also occur naturally such as the Arachnorchis argocalla (White Beauty Spider Orchid) and Arachnorchis intuta (Ghost Spider Orchid) both photographed by John Fennel, or as a dominant colour such as Lorraine Badger’s Eriochilus collinius (syn Eriochilus sp Hills Woodland).

Whilst blue orchids occur outside of Australia, their “colour cannot rival” … “the intensely blue flowers” … “especially [are] unique in the orchid world” … “of their Australian counterparts. The sun orchids (Thelymitra) in particular are famous for their sky blue flowers.” (Ronse 2008: 103)

Based upon Jones 2006 tome, the following genera have true blue orchid species – Cyanicula (9 species), Pheladenia (1 species), Epiblema (1 species) and the largest group Thelymitra (about 65 out of potentially 118 species) plus one hybrid, XGlossodenia tutelata. Of the epiphytes, blue is almost non-existent except for three which Jones lists that rarely might be bluish and they are Vappodes bigibba, V. lithocola and V. phalaenopsis*.

With such rarity, is it any wonder then that the Chinese attached special significance to it as a plant that could cure lung disease and the Aztecs saw it as a symbol of strength.

*Names used as they appear in Jones 2006 tome