T. benthamiana, the winning picture, is a beautiful sun orchid that is found across the southern Australia from Western Australia through South Australia to Victoria and Flinders Island. More common in west than elsewhere it is the only one of the seven species in the T. fuscolutea complex to be found in the east.

It would appear that this complex has been a problematic as indicated by Jeanes (2006) in his article Resolution of the Thelymitra fuscolutea (Orchidaceae) complex of southern Australia published Muelleria; the Royal Botanic Gardens of Victoria research journal.

Since the early days confusion, which persisted into this millennium, has occurred. In 1871 Reichenbach recognised 3 species one of which was T benthamiana but Bentham after whom the orchid was named disagreed and consider it but a synonym of T. fuscolutea. There were many twists and turns in the names but in effect, for over a hundred years, most authors followed Bentham’s taxonomy rather than Reichenbach’s until 1989 when Mark Clements after studying the drawings, literature and orchid type material came to the same conclusion as Reichenbach that T. benthamiana was a distinct species from T. fuscolutea. Since then, authors have followed Reichenbach/Clements taxonomy.

Over the decades, the number of species in this complex varied considerably. By 1938 three separate species were recognised, but between then and 1989 it fluctuated between recognizing one, three and four species and in 1998 the orchidologist were considering a possible seven species.  These were all confirmed and named in Jeans’ 2006 paper. Today, according to Orchids of Western Australia there is potentially an eighth member in this group.

Jeanes highlights some of the issues involved in determining which species is which. Some of the issues are lack of accurate/detailed information such as location, type of terrain, habitat, surrounding plants, date of collection, etc. Dried specimens by themselves are inadequate as important features may be lost in the drying process.

This complex is but an example of a widespread problem across many of our Australian orchids indicating not only the need for careful observations in the field but meticulous record keeping that others can access.

Brown A, et al, Field Guide to the Orchids of Western Australia, 2013

Thank you to Juergen Kellermann, (senior botanist for the State Herbarium) for critiquing this article. 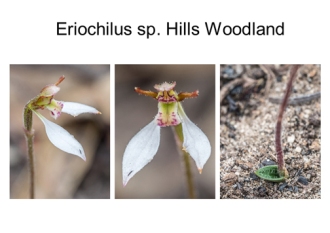