The following article is the beginning of a series of discussions on identifying features of various orchid species/genera.

A previous blog (see here) referred to the importance of the column in Thelymitra but did not give details of the parts of the column which is the subject of this blog.

The columns in a Thelymitra (Sun Orchid) may be one of the main identifying features of a sun orchid and so this article looks at those features that botanists will often refer to in their descriptions.

Though we cannot physically dissect an individual flower, we can make use of photographs to spot the various features.

The diagram below is that of T. ixioides (based on the taxonomy of 1984) column whilst the photographs are that of T. juncifolia column (as T. ixioides is now considered to be limited to the eastern states). The column of these two are similar. One photograph will not give all of the features hence in this article the three photographs show all of the features except the viscid disk where the pollinia is stored. The stigmatic plate is sticky and receives the pollen for fertilization. 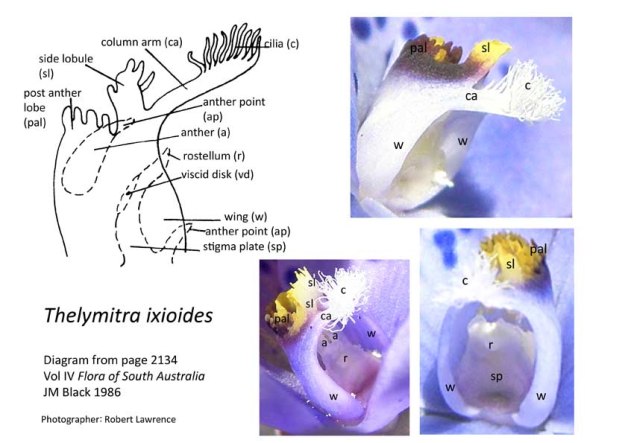 Most of the variations between the Thelymitra columns occur within the upper portion of the column. The post anther lobe can be quite varied. For instance, with T. ixioides/T. juncifolia the post anther lobe is not hooded. Some with hoods may have deep splits, whilst others form a broad fringe. Yet again, others have variations within the column arms such as having no cilia. This will be dealt with in further articles.

An advantage of entering a photograph is that it does not need to be in season. This month John Fennell entered an autumn flowering Corunastylis fuscoviride and a late spring/early summer flowering Diuris sulpherea, Robert and Rosalie Lawrence both entered the winter flowering Diplodium robustum and the winning picture, John Badger’s Thelymitra epipactoides is an early spring flowering orchid.

Sun Orchids are another popular winner of the competitions and as there was a comprehensive article written on Thelymitra epipactiodes and as some have asked “what, actually, is a sun orchid?”, it is time to answer the general question about Sun Orchids.

Of all the Australian terrestrial orchids Thelymitra or Sun Orchid is the one that looks the least like an orchid as all the segments – the sepals and petals including the labellum – are very similar in appearance. They mimic the flowers of the Lilliaceae and Goodeniaceae families.

Nevertheless, it is an orchid as evidenced by the column. Columns are a unique feature of orchids. They are the combination of the reproductive organs into one structure. Between the different Thelymitra species, it is the column that is often the main distinguishing feature used in identification. Because, the column is quite detailed and so important in identification, we plan to feature this in future Journals.

Other general features of Thelymitra are single, non-hairy, mainly linear leaf (of course, there are always exceptions) with a single flower stem. Flowers range from being singular to having multiple flowers which come in a range of colours from yellow to pinks to blues. Despite the lack of nectar, most Thelymitra are bee pollinated but there are some that are self-pollinated. The pollinia instead of being yellow are white and it is not unusual to see the white pollen on the self-pollinating flowers.

Orchids are unique in the floral world. Two distinctive characteristics that set orchids apart from other plants are the labellum and the column.

The labellum is a modified petal.  It is extremely varied in appearance; “often lobed, spurred, adorned with glands, appendages of calli (callus, a hardened swelling or thickening of the skin), sometimes mobile and highly irritable and often brightly coloured”. * The labellum is important for pollination.

The column (as described by Bates and Weber) “is a distinctive feature of all orchids and a unique structure in the plant kingdom. It is formed by fusion of the male parts ‘stamens’ and female organ ‘pistil’.”*

Below are examples of the various types of labellums and columns in some South Australian terrestrial orchids. Each genus has its own characteristic labellum and column.

Orchids can be incredibly easy to identify or frustratingly difficult.  For instance, the Flying Duck orchid is easily recognizable.  The name says it all. But for many other orchids, particularly the ubiquitous blue sun orchids, it is necessary to make careful observations.

For sun orchids the most important distinguishing feature will often be the column, details of which are described or illustrated in orchid keys.  For example Bates and Weber, Orchids of South Australia (1990) has an illustrated dichotomous keys showing the different types of columns.

With today’s cameras, it is possible to photograph the column, preferably from front, side and above.  This helps greatly with identification.

The following photographs illustrate the variety of columns.

And it is not only the blue orchids that can be a problem, in South Australia; there are three pink orchids which are different in size and flowering time, features that are not obvious in a photograph,  so the column is a helpful identification tool.

And just what is the column? It is the reproductive organ of the orchid flower and is unique amongst plants because it is the fusion of the male (stamens) and female (pistil) parts.  It is usually found in the centre of the flower and both releases and receives the pollen sac.