The following article is from the April 2016 Journal of the Native Orchid Society of South Australia.  The article is complete in itself but Part Two of this post will illustrate how images can help with images of Crytostylis robusta and C. reniformis.

Orchids are beautiful plants and many of us like to capture that beauty on photographs. And there are many beautiful pictures around.

Many times NOSSA, the Herbarium and other specialist groups receive images requesting identification but the vital information is missing.

When photographing for identification, it is necessary to take more than one image, particularly if you are unable to easily return to the site for more images. When in doubt, take several shots from many different angles highlighting different features of the plant and its habitat.

Another very important point to remember is, when there are several of the same plant, to photograph the orchid that is most representative of the group, not the atypical or unusual plant.

As a general guide, it is helpful to take a picture of each of the following

Other helpful things to consider photographing are:

It is also good to give an idea of size, this can be as simple as using a thumb or hand, a coin (show the reverse not the head) or any item that had an easily recognized size. It is important to have the object next to the feature being photographed. For example, a coin on the ground next to a leaf or a hand immediately behind the flower gives a clear indication of size. Remember to take another photo without the hand or coin.

Some species are distinctive and easily recognised, eg the Flying Duck Orchid, but others are not and it is helpful to know what part of the plant to photograph as different genera will have different identifying features.

The Australian Virtual Herbarium has some good tips for photographing flower. Click here to visit the site 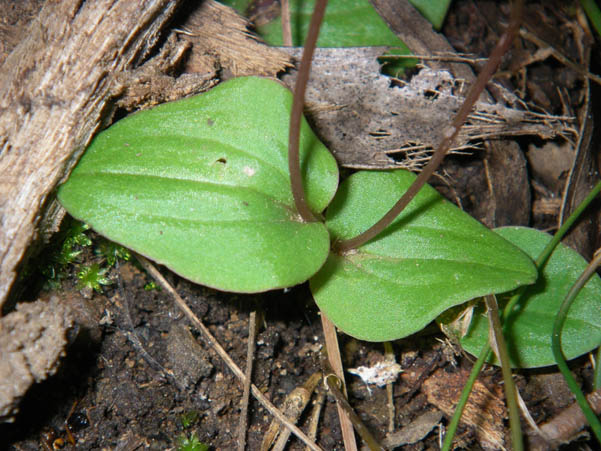 Just on Christmas, NOSSA received an enquiry from Tim in the South East about an orchid he had photographed.  He knew about Dipodium roseum but in 20 years he had not seen one like this one.

Tim’s orchid was G. procera.  The features that set it apart from the other two were the time of year – late December whereas both G. sesamoides and G. procera would have finished flowering (and for 2014 most orchids finished flowering earlier than usual); the spike was crowded and the plant was upright but G. sesamoides has a bent or droopy spike when in bud and G. vescula is small with very few flowers.

Though Tim considered the photographs to not be very good, he’d photographed the necessary features to help with identification. Another feature seen in his picture is the warty appearance of the plant compared with the photograph of the G. sesamoides.

Although it is has no conservation rating federally and may even be considered secure in the Eastern States, in South Australia it is rated endangered, so well done to Tim for spotting it!

It was possible to identify this orchid from the information found in South Australia’s Native Orchids, an electronic book produced and sold by the Native Orchid Society of South Australia.  Identification was confirmed by one of our most knowledgeable members. 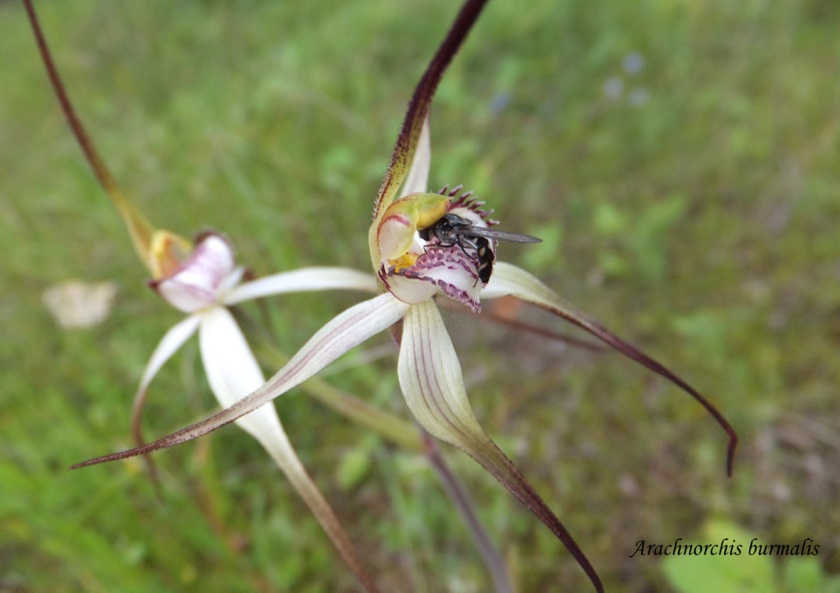 In all there were four potential pollinator photographs. The insects were either scrounging around at the base of the column or else they had the pollinia attached to them. Unfortunately only one was a true pollinator so the category became Insects with Pollinia. The winning photograph of Arachnorchis brumalis with an unidentified hoverfly was taken by Chris Davey. Interestingly the other two pictures also featured Arachnorchis species with the hover fly Simosyrphus grandicornis. Resembling a wasp but minus the sting, this species is one of the common hover flies native to Australia.

Called Hover Flies owing to their ability to hover motionless in one spot, they are also known as Flower Flies because they are often found hovering around as well as pollinating flowers. It is not surprising, therefore, to find them around orchids. Yet instead of being called pollinators they are non-pollinators (Bates & Weber 1990). They visit the orchids, forage inside the flower and may even manage to collect some pollinia₁ but that is all. They may not necessarily visit another flower of the same species but if they do, they will fail to deliver the pollinia to the stigma2.

Rudie Kuiter agrees with Bates that hover flies are not orchid pollinators but just when we think we have worked it out he adds “but we have at least one orchid in Victoria that is pollinated by hoverflies and witnessed now several times and this is Caladenia catenata” (synonym Petalochilus catenatus). Notwithstanding the case for this species, it would appear that in most cases hoverflies remove pollinia so that it is not available to a more specific pollinator.

Why then are the hover flies attracted to the orchids? Is it for food? An internet image search revealed that hover flies visit the flowers of many different genera including Thelymitra and Diuris. This is interesting because flowers are the food source for hover flies but though many orchids promise food, many species do not produce the nectar and pollen (as a food source) that they desire. Diuris and Thelymitra belong to this group of non-nectar producing flower. Other orchids that don’t produce nectar include Gastrodia, Dipodium and the Duck orchids. Again, there are orchids such as Crytostylis which produce minimal nectar and with Prasophyllum the nectar is hidden in cells that require puncturing – not a good food source!

Having discussed hover flies as non-pollinators, in this month’s competition, which photograph had a pollinator? – It came last and was Robert Lawrence’s photograph of a native bee on a Dipodium pardalinum, another non-nectar producing orchid. The story of this photograph was featured in Photographing Orchid Pollinators, April 2014 Journal as well as in a previous blog on Photographing Pollinators.

Jones, Native Orchids of Australia Including the Island Territories, 2006

Martin, The Vocabulary of Orchids: An Amateur’s Perspective, 2005

2The stigma is a sticky depression (or swelling) at the front of the column, the receiving surface for the pollinia that is necessary for germination.