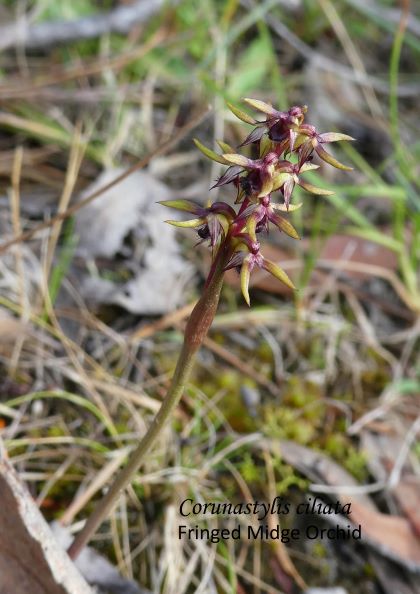 The winning photograph for March 2019, was Corunasylis ciliata (syn Genoplesium ciliatum). As with so many orchids, it has undergone a few name changes. Originally Prasophyllum, then Genoplesium and currently Corunastylis

Although Genoplesium was split into two with only one species remaining in Genoplesium and the others placed into Corunastylis, this split has not been accepted by the everyone. For example, eflora of SA and PlantNET use Genoplesium whilst VicFlora uses Corunastylis.

Whilst researching C. ciliatum I came across images of Prasophyllum spp. being misidentified as Corunastylis spp. and as it was originally described in Prasophyllum it seems appropriate to examine the similarities and differences between the two genera.

Some of the shared features of the two genera are

Thank you to Greg Steenbeeke for reviewing the article.

Rudie Kuiter’s Short Paper 2 Taxonomic Status of the Mauve Leek-orchid Prasophyllum suttonii Rogers & Rees, 1912 (Orchidaceae) published in May 2017 documents how he used original source material to determine the identification of a species that was considered extinct.  Prasophyllum suttonii belongs to the Prasophyllum odoratum/diversiflorum complex and is very similar to the later named Prasophyllum alpestre. It was considered to be extinct but Rudie’s view was not that it was extinct but that it had been “lost in taxonomy, and its status need to be restored”. His article documents how he used original material to help determine identification of the species he had photographed. 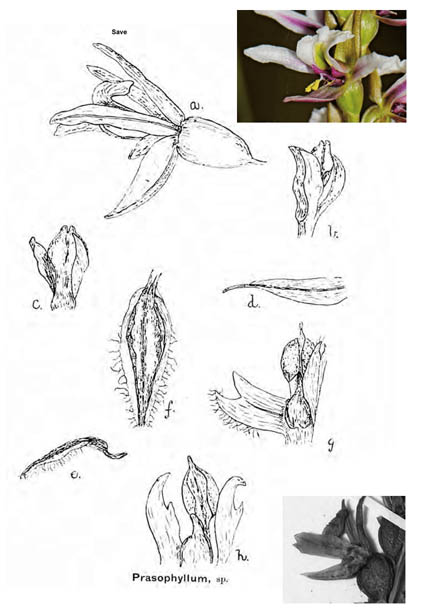 The Native Orchid Society of SA has been involved with the Threatened Orchid Project which is attempting to propagate some of our most threatened orchids.  There has been some success such as Thelymitra epicaptoides (Metallic Sun Orchids) but others are proving elusive.  Marc Freestone, from the Orchid Conservation Project, Royal Botanic Gardens Victoria, is a PhD student who is researching one such difficult to grow orchid genus, the Prasophyllum.

To assist with his research Marc has the sent the following request.

CAN ANYONE GROW LEEK ORCHIDS?

South Australia has about 40 species and Victoria about 74 species of the native Leek Orchids, Prasophyllum.  Some are on the brink of extinction.

A major problem hampering efforts to prevent our Leek Orchids from going extinct is that they have proven next to impossible to grow in cultivation.  They have proved extremely difficult, usually not germinating at all, or germinating but then dying soon after.  Occasionally some success has been had (particularly with symbiotic germination) but successful germination trials to our knowledge have so far proved un-repeatable.  Working out how to grow Prasophyllum is critical for the survival of many species at risk of extinction across southern Australia.

To try and change this, I will be studying Prasophyllum and their relationships with symbiotic mycorrhizal fungi.

But I need your help!

I would encourage people to contact Marc with whatever information that you have, no matter how insignificant you may think it is.  Every little bit helps including unsuccessful attempts.

His eventual aim is to be able to work out how to grow them reliably from seed in cultivation.

Orchids are attractive and abound in variety. It is the variety that often provides the challenge of identification. As a novice it can be a bit overwhelming. In the eye of the beginner, the experienced orchid hunters appear to have no difficulty with identification. Over the years they have accumulated various clues that guide them toward accurate identification.

This series aims to document the clues that orchid hunters use.

The first in the series relates to distinguishing between Microtis and Prasophyllum leaves. When in flower it is easy to see which is which but not so when only in leaf; and as they do not always produce flowers it is helpful to be able to separate them out at leaf stage.

Both leaves are green. Both are cylindrical. Both are hollow. Both resemble onion leaves.

The differences can be found in one or two areas. Microtis leaves are always green at the base whereas Prasophyllum leaves usually but not always will have a red or purplish coloured base. To help in identification, it is necessary to examine the base by moving the leaf litter aside to see where the plant emerges from the soil.

Prasophyllum species that could have a green base are P. laxum, P. occulatans, P. sp Jip Jip, P. elatum, P. sp Sandplain, P. pallidum (although this is short and usually in bud when noticed), P. spicatum, P validum.  So further observations are necessary.

Another other area of difference is that the broken leaf of a Microtis yields a mucilaginous (thick sticky) sap; the Prasophyllum leaf does not.

Within the segregate genera used by many NOSSA members, there are two other genera with similar leaves. They are Microtidium and Hydrorchis. Again they are green, cylindrical, hollow but only hollow in the lower half. The top half is solid.

It should also be noted that Microtis can form dense colonies but Prasophyllum will never form more than loose colonies.

Finally, if upon gently feeling the base of these leaves it feels solid, that will indicate that there is a bud and it will most likely flower this season.

Think of deserts and the image is that of a bleak barren landscape with little to see but this is not so.  The conditions are harsh but there is a myriad, though not an abundance, of hardy fauna and flora if one but looks closely.

But concerning orchids – No orchids have been found in true deserts…..  They also appear to be absent from the arid mountains of the far north-west, or at least no-one has ever found orchids there.

Orchids need moisture and so they do not grow on unstable soils such as dry sand-hills, gibber plains or the many saline areas of the far north but on the desert fringes there are micro-climates where the moisture, humidity and soil structure is  just right (to quote Goldilocks) for orchids.  This micro-climate is created by [s]hrubland  [which] is … [an] … important dryland orchid habitat. Besides providing shade and shelter for the orchids, shrubs like the many species of wattles, Acacia and hop-bush Dodonea drop fine leaves which help to hold the soil together and slowly break down into humus rich with nutrient and water storing capability. These shrublands usually form in soils too dry or shallow for trees. Orchids of course have no need for deep soils as they are shallow rooted.

Of the five desert botanical regions, the Eastern region contains the most number of species with over a dozen species.

Orchids of the Eastern Region – this region is from the east of the Flinders Ranges to the New South Wales border and includes the Olary Spur and Lake Frome.

The Gairdner-Torrens region includes, besides the salt lakes it is named after, the Gawler Ranges and the southern part of the Great Victoria Desert.  Though not as many species as the Eastern region, it contains some different species including a Sun Orchid.

Third of this group is the Nullabor region.  Consisting of flat treeless limestone plains, this area, surprisingly, has two species both of which have been found close to the coast.

The final two regions Lake Eyre and North-Western contain the vast expanses of desert of the far north of South Australia.  Definitely not a place to find orchids yet one specimen has been collected from each of these two regions.

It is unusual to find orchids in the desert because they only grow when there have been good winter rains which isn’t very often.  But nevertheless, here in South Australia we have over 20 possible species – an astonishingly high number for such a harsh area!

A Melbourne general medical practitioner and expert on subalpine flora.

In all there were four potential pollinator photographs. The insects were either scrounging around at the base of the column or else they had the pollinia attached to them. Unfortunately only one was a true pollinator so the category became Insects with Pollinia. The winning photograph of Arachnorchis brumalis with an unidentified hoverfly was taken by Chris Davey. Interestingly the other two pictures also featured Arachnorchis species with the hover fly Simosyrphus grandicornis. Resembling a wasp but minus the sting, this species is one of the common hover flies native to Australia.

Called Hover Flies owing to their ability to hover motionless in one spot, they are also known as Flower Flies because they are often found hovering around as well as pollinating flowers. It is not surprising, therefore, to find them around orchids. Yet instead of being called pollinators they are non-pollinators (Bates & Weber 1990). They visit the orchids, forage inside the flower and may even manage to collect some pollinia₁ but that is all. They may not necessarily visit another flower of the same species but if they do, they will fail to deliver the pollinia to the stigma2.

Rudie Kuiter agrees with Bates that hover flies are not orchid pollinators but just when we think we have worked it out he adds “but we have at least one orchid in Victoria that is pollinated by hoverflies and witnessed now several times and this is Caladenia catenata” (synonym Petalochilus catenatus). Notwithstanding the case for this species, it would appear that in most cases hoverflies remove pollinia so that it is not available to a more specific pollinator.

Why then are the hover flies attracted to the orchids? Is it for food? An internet image search revealed that hover flies visit the flowers of many different genera including Thelymitra and Diuris. This is interesting because flowers are the food source for hover flies but though many orchids promise food, many species do not produce the nectar and pollen (as a food source) that they desire. Diuris and Thelymitra belong to this group of non-nectar producing flower. Other orchids that don’t produce nectar include Gastrodia, Dipodium and the Duck orchids. Again, there are orchids such as Crytostylis which produce minimal nectar and with Prasophyllum the nectar is hidden in cells that require puncturing – not a good food source!

Having discussed hover flies as non-pollinators, in this month’s competition, which photograph had a pollinator? – It came last and was Robert Lawrence’s photograph of a native bee on a Dipodium pardalinum, another non-nectar producing orchid. The story of this photograph was featured in Photographing Orchid Pollinators, April 2014 Journal as well as in a previous blog on Photographing Pollinators.

Jones, Native Orchids of Australia Including the Island Territories, 2006

Martin, The Vocabulary of Orchids: An Amateur’s Perspective, 2005

2The stigma is a sticky depression (or swelling) at the front of the column, the receiving surface for the pollinia that is necessary for germination.