Skip to content
In the NOSSA Constitution (2007) the aims of NOSSA “are to promote and engage in activities for the promotion and furtherance of :

The article following is about one of the ongoing conservation activities with which NOSSA members were and are currently involved.  Quoted verbatim from SA Veg on the Edge, Vol 7, No. 1, 2007

Recovery Plan for 12 Threatened Orchids in the Lofty Block Region released
Since 1998, the Lofty Block Threatened Orchid Recovery Project (LBTORP) has been implementing recovery actions for threatened orchids in the Lofty Block region of SA. In late 2006, a draft recovery plan was completed for the following twelve species:
The recovery plan describes each of these twelve species in detail including their morphology, distribution, population size, habitat, and ecology.  Importantly, it also outlines the threats to each species and prescribes recovery objectives, targets, and actions for the next five years.
Recovery actions will be implemented for each of the twelve species in accordance with the recovery plan over the next five years by the LBTORP.  Community involvement is recognised as a key factor in the successful delivery of on-ground recovery actions.
Fact sheets and a webpage that provide up to date information on the program were recently completed … Joe Quarmby, Lofty Block Threatened Orchid Recovery Project Officer , SA DEH
(NB Joe Quramby now is the Threatened Flora Ecologist Natural Resources, Adelaide & Mount Lofty Ranges Partnerships and Stewardship and DEH is now Department of Environment, Water and Natural Resources, 2014)

The article may be seven years old but it is a good overview of some of the conservation work that NOSSA members have done with Joe Quarmby.

The full 176 page report can be found here.

South Australia has some very interesting and unique orchids but it is not always possible see them  either because one cannot get out to see them or the season has been poor with inadequate rain at the right time.  So, one of NOSSA’s member has produced a video.  It starts in autumn and goes through to summer.

So sit back and enjoy ……

The winning picture was a single flower of Thelymitra epipactoides (Metallic Sun Orchid) taken by Rosalie Lawrence. This picture was cropped from a photograph taken on a mobile phone. Phones have come a long way since the days of Alexander Graham Bell! 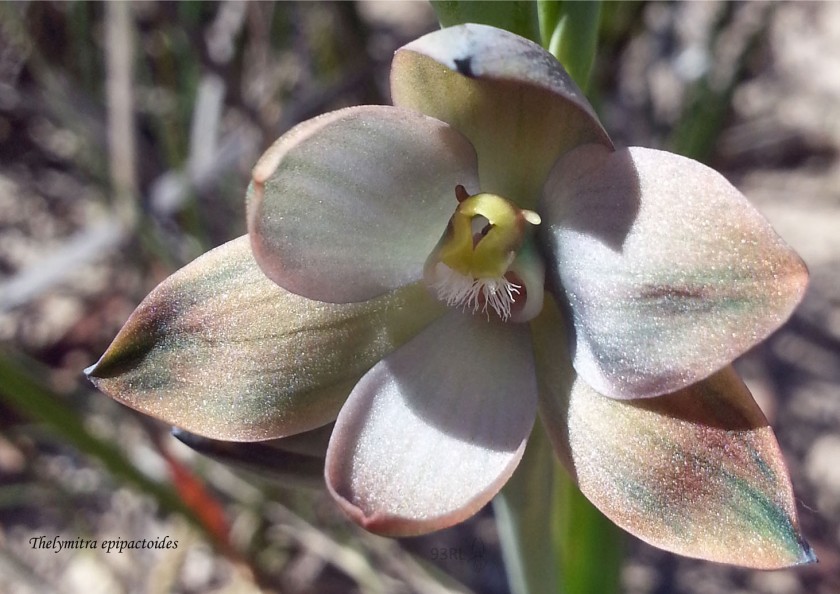 T. epipactoides is a special orchid both in its beautiful colourings and that it is one of our rarest orchids. This endangered species has been well studied in an effort to prevent its demise with the result that there is an abundance of information about it. Recently, with the knowledge gained, Dr Nouska Reiter of the Australian Network for Plant Conservation (ANPC) and her team have managed to cultivate 3,000 plants with the plan to re-introduce them back into the bush in the Wimmera area.

Following are some interesting points from two good sources, which are the

(But once a plant has flowered)

When noticed, Australian orchids capture people’s imagination and many want to be able to grow them.  As a result we often receive request for where to purchase them, particularly from overseas.  For people overseas we are unable to help them.  Recently I came across some comments from Philip Shin and he has kindly written about his experience with trying to purchase orchids from Australia.  I trust that his experience will help our overseas people understand some of the issues involved.

It has been brought to my attention that there have been many requests from international buyers who wish to purchase Native Australian Terrestrial Orchids from Australia. To give you all a basic idea of who I am and why I’m writing this brief article, I will tell you a few things about me.

Firstly, I am an orchid hobbyist just like you all. I live in the United States of America. My love for orchids stemmed from repeated failures of growing bromeliads, (which I eventually learned how to grow), after which my parents had suggested I try growing orchids instead, as they might be easier to cultivate. I took them up on it and for the most part, when it came to many of the more commonly available orchid hybrids, they were right. After a few tries, I managed to not only grow some orchids, but I also was able to bloom them as well! From here, my appreciation for the hobby grew to include species orchids. Then I learned about terrestrial orchids and how people were attempting to cultivate them in their gardens/greenhouses, and that lead to me wanting to grow them too.

Some of the terrestrial orchids that caught my eyes were those pretty little blue flowered orchids in the genus Thelymitra. I was always told that there were “no such things as orchids that were true blue”, but seeing photos of them contradicted that notion, and thus I was intrigued. Then, I started hearing about how some people were attempting to grow them. I thought to myself, “I must have some!” And that was when reality hit hard.

You see, I eventually learned that acquiring Thelymitras through legal channels was quite an endeavour here in America. I had to acquire a permit through our APHIS/USDA (Animal and Plant Health Inspection Service/ United States Department of Agriculture) to import plants from other countries, (specifically, Australia and Europe in the case of Thelymitras and a few other Native Australian Terrestrial Orchids). Of course, there was also paying for the CITES (Convention on International Trade in Endangered Species) permit and phytosanitary certificate in order to have them make it through our US Customs. The difficult part wasn’t necessarily with the USDA permit, but rather paying for the CITES permit and phytosanitary certificate. When Australia was open for export, the fees for CITES permits and phytosanitary certificates were rather high in price, running at about $250 USD per shipment. But shortly after making two orders to be shipped out from Australia, the exportation laws had changed radically! During this time, CITES and phytosanitary paperwork now cost somewhere in the order of $1,000 USD. It was now clear that Australia was no longer in the business of exporting goods from small companies. Which then brings us to the next option, Europe…

Europe had somehow also managed to get a hold of Native Australian Terrestrial Orchids much earlier than America did, but they were still not very prevalent in the hobby.

It then bears the question, “if Native Australian Terrestrial Orchids are already on the market, why aren’t they more prevalent or more popular?” The answer to this question would be, although people have attempted to grow these orchids, they are not necessarily the easiest orchids to grow long term. Some may be easier than others, but they are still a novelty in the hobby, partially because of this. The difficulty lies in that they are plants that have a tight symbiotic relationship with fungi. I’m not sure whether or not the orchids started to develop smaller and smaller root systems because of the symbiosis, but these orchids do tend to have rather negligible amount of roots. This often makes it difficult to cultivate these orchids, because once the roots get damaged for any reason, they pretty much die. Hence, why these orchids are not more prevalent in numbers despite the demand.

In short, this article is an explanation of the difficulties of obtaining Native Australian Terrestrial Orchids. And this is also some insight on how it is trying to obtain these plants here in America. For anyone coming across this article, I appreciate the time and effort it took for you to read through an American hobbyist’s perspective on Native Australian Terrestrial Orchids. Thank you.

Just as a postscript, Philip mentioned that he could grow Diuris or Donkey Orchid “but that it takes quite a bit of trial and error before you can see anything that resembles success.”

True, it is not common, but that is partly because it is a hybrid and, correctly speaking, the name should be written as Thelymitra x irregularis (the “x” indicates that it is a hybrid).

For a hybrid to occur, the two parent species need to grow in close proximity, the flowers need to open at the same time that the pollinator is visiting flowers, either to collect or to deposit the pollen and, in the case of self pollinating species, before the individual flower has pollinated itself.

The majority of hybrids are sterile, but occasionally some are fertile.  When hybrids occur the majority will only last a few years before disappearing although sometimes colonies are formed which may last for decades.  Hence, it is not usual to name hybrids, but the more common and recurring ones have been named formally.  T. x irregularis is one of them.

Due to the transient nature of hybrids and the conditions needed to produce them, the named hybrids are not common, but since the 1890s specimens of Thelymitra x irregularis have been collected in every decade, which suggest that this hybrid readily occurs.  The 71 specimens held in the Australian herbaria have been collected from four states – which gives a good indication of the distribution but not necessarily the frequency of occurrence.  See Australia’s Virtual Herbarium (AVH) for details.  The AVH lists 12 herbarium records for South Australia with specimens collected from the Adelaide Hills, the Barossa Valley, Kangaroo Island and near Naracoorte.

The botanical name “irregularis” refers to the description of the column.  With many sun orchids, it is often necessary to observe the column to distinguish one species from another.  In this instance the top of the column is irregularly toothed.  Retired Aussie has some very good photographs with one in particular showing the column detail.

Thanks to Juergan Kellermann, State Herbarium of South Australia for his help with this post.

The name Arachnorchis valida was not validated until 2002; synonym Caladenia valida. Previously it had been included under Caladenia huegelii (a Western Australian species) and Caladenia reticulata.

A. valida grows in sandy or sand over red clay soil, in sheltered clearings within heathy woodland or mallee but within a very restricted and disjunct distribution on Fleurieu Peninsula and Kangaroo Island in South Australia; and Otway Plain, Victoria. Rated Endangered in South Australia, it is not listed nationally.

Although A. valida shares some similar features with A. reticulata (ie 1 to 2 flowers, clubbed sepals, calli on the labellum) it also has quite distinctive features (see chart below) that help to differentiate between the two as they can sometimes be found growing together.

Comparison of A. valida and A. reticulata

See the 2014 April Journal for hints of photographing orchid pollinators.