Skip to content
In the NOSSA Constitution (2007) the aims of NOSSA “are to promote and engage in activities for the promotion and furtherance of :

The article following is about one of the ongoing conservation activities with which NOSSA members were and are currently involved.  Quoted verbatim from SA Veg on the Edge, Vol 7, No. 1, 2007

Recovery Plan for 12 Threatened Orchids in the Lofty Block Region released
Since 1998, the Lofty Block Threatened Orchid Recovery Project (LBTORP) has been implementing recovery actions for threatened orchids in the Lofty Block region of SA. In late 2006, a draft recovery plan was completed for the following twelve species:
The recovery plan describes each of these twelve species in detail including their morphology, distribution, population size, habitat, and ecology.  Importantly, it also outlines the threats to each species and prescribes recovery objectives, targets, and actions for the next five years.
Recovery actions will be implemented for each of the twelve species in accordance with the recovery plan over the next five years by the LBTORP.  Community involvement is recognised as a key factor in the successful delivery of on-ground recovery actions.
Fact sheets and a webpage that provide up to date information on the program were recently completed … Joe Quarmby, Lofty Block Threatened Orchid Recovery Project Officer , SA DEH
(NB Joe Quramby now is the Threatened Flora Ecologist Natural Resources, Adelaide & Mount Lofty Ranges Partnerships and Stewardship and DEH is now Department of Environment, Water and Natural Resources, 2014)

The article may be seven years old but it is a good overview of some of the conservation work that NOSSA members have done with Joe Quarmby.

The full 176 page report can be found here.

South Australia has some very interesting and unique orchids but it is not always possible see them  either because one cannot get out to see them or the season has been poor with inadequate rain at the right time.  So, one of NOSSA’s member has produced a video.  It starts in autumn and goes through to summer.

So sit back and enjoy ……

The winning picture was a single flower of Thelymitra epipactoides (Metallic Sun Orchid) taken by Rosalie Lawrence. This picture was cropped from a photograph taken on a mobile phone. Phones have come a long way since the days of Alexander Graham Bell!

T. epipactoides is a special orchid both in its beautiful colourings and that it is one of our rarest orchids. This endangered species has been well studied in an effort to prevent its demise with the result that there is an abundance of information about it. Recently, with the knowledge gained, Dr Nouska Reiter of the Australian Network for Plant Conservation (ANPC) and her team have managed to cultivate 3,000 plants with the plan to re-introduce them back into the bush in the Wimmera area.

Following are some interesting points from two good sources, which are the

(But once a plant has flowered)

An important first lesson to learn when out orchid hunting is to watch where you put your feet.  In this video the Orchid Hunter explains the how and why for watching where you step.

Protect Our Orchids – Stay On the Path

A British navy surgeon who circumnavigated the globe from west to east with Captain George Vancouver, in the tumultuous voyage of 1791 to 1974, explored extensively in south-west Western Australia, and was later president of the Linnean Society of London; his name is recorded in the names of banksias (including the firewood Banksia [Banksia menziesii]), orchids and mosses of the King George Sound hinterland which record his service to Australian botany.

Having looked at the background, Professor Pearn documents the individual doctors and orchids.  In the original paper the doctors were listed alphabetically but these posts will be in chronological order based upon the doctor’s year of birth.

A medical student in Sweden and London, and botanist-librarian on the Endeavour voyage to Austalia (1769 – 1771); his name is commemorated in the names of Australian species of Aciacia, Banksia and Geraniums.

The type specimen is from New Zealand.

In almost a word – every continent except the Antarctica.

Orchids are amazing, we expect to find them in the tropics but they can be found anywhere from the cold climes of Alaska to the semi-arid edge of the Australian deserts.

An Interactive Key to Australian Orchid Genera has an excellent chapter on habitats of Australian orchids.

15 habitats are listed with a list of the type of orchid likely to be found there.  The vast majority of Australian terrestrial orchids are found in either lowland (less than 500 metres altitude), in coastal regions or in open forest/woodland.  There are none in the Red Centre. 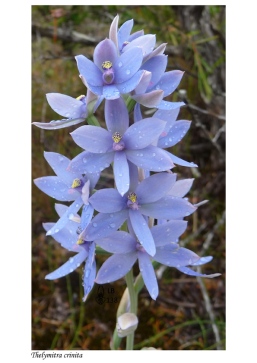 With a common name of Queen Orchid, Thelymitra crinita is aptly named, for the flower has a quiet regal air of elegance and delicacy that would appeal to many people. Lorraine Badger who took this photograph was one of those people.

T crinita is a common Western Australian orchid that can be found from Perth around to Albany with a disjunct area near Esperance. Back in 1839, it was one of 60 orchids named by John Lindley in ‘Appendix to the first twenty-three volumes of Edwards’s Botanical Register together with A Sketch of the Vegetation of the Swan River Colony’ page xlix. Though the register is written in English the species description is in Latin, here reproduced for all those Latin buffs –

On a recent visit to the South Australian State Herbarium, Michelle Waycott, Chief Botanist, explained that there is a strict botanical standard for describing a species. You may  be pleased to  know  that  at  the  18th  International  Botanical Congress in Melbourne, Australia in July 2011, it was determined  that  from  the  1st January  2012  it  was  no longer mandatory for descriptions to be in Latin only. English can now be used.

Replanting in bushland should be restricted to orchid species that grow or once grew in the local area. No hybrids please.

If planting out in the garden or bush, choose a location with good air movement and winter sun and a thin layer of surface mulch. Slashed native ground cover is good. Native terrestrial orchids cannot stand competition from weeds, grasses, slugs and snails and scratching blackbirds (all introduced pests). They will rot away in dense weeds or dense understory plants. If in a frost prone area they may need overhead protection from a shrub or trees. For plants in growth, dig out a hole a little bigger than the tube. Knock out the tube and insert the contents into the hole and backfill with as little disturbance as possible. Dormant tubers can be planted in a furrow, 50mm or more deep, and backfilled just like planting beans. Water in. The colony forming species will spread out and form patches of plants over a period of several years.

Orchid seed is like fine dust and can be mixed with fine dry sand to help spread it over a large area. Broadcast using a pepper-shaker over a suitable site. Results are dependent on the season and whether fungi are present. This method is slow to show results as flowers may not be seen for 5 to 10 years after seed is sown. More seedlings germinate if there are mother plants already growing.

To learn more about re-establishing orchids in the bush, visit the Vale Park Our Patch website to see the work being done by Heather Whiting and her team.

Terrestrial orchids can be placed into one of three groups that have similar cultural requirements.

Fast multipliers are the easiest deciduous terrestrials to grow and potfuls are regularly seen at orchid meetings and shows. They multiply rapidly by forming 2 – 4 tubers per plant each year. They will take some fertiliser and grow better if repotted annually. It is usually not commercially viable to grow seed of these in flask. They will grow well in premium potting mix from your local hardware store with some sand added. This group contains many genera including Acianthus, Chiloglottis, Corybas, Cyrtostylis, Diplodium, Leptoceras, Microtis, Pterostylis and some species from Caladenia, Diuris and Thelymitra.

Slow multipliers are not so easy because there is less room for error. Some very showy Diuris, Pterostylis and Thelymitra fall within this group. A few have a near zero increase rate and will fade away unless additional plants can be produced to make up for occasional losses from predators and disease. They are more expensive because they have to be raised from seed in flasks. Flowering plants are hand pollinated and the seed collected just before the pods split open and the dust-like seed blows away. The pull-off-the-tuber method can be used with some Diuris and Pterostylis species to double plant numbers annually. Do not fertilise these except when repotting. Those with large tubers such as Thelymitra nuda and Diuris behrii should be the first to be repotted in November – December.

Some of Australia’s most fascinating orchids rely on a symbiotic fungal association to obtain nutrients from the soil as these orchids have virtually no roots. The majority of Australia’s terrestrial orchids are in this group and many are rare plants as they seldom multiply. We talk about survival rates for these orchids that are normally less than one. Propagation is from seed. They have a reputation for being difficult to grow in pots. However some species have been kept alive in pots for nearly 30 years. Never use fertiliser because it can kill the fungi. They should be repotted only when the tubers reach or come out of the bottom of the pot or seedlings get too crowded. A new thin layer of leaf litter is added to the surface each summer to feed the fungi which is active near the surface. Flowers are hand pollinated to get seed. Seed is sprinkled on the pots each autumn and with good culture, seedlings will appear in spring around mother plants.

Since the fungus cannot be seen with the naked eye, the health of the leaves is used to indicate that the fungal relationship with the orchid is working. If seed is sown in autumn, by springtime, when mature orchids flower, there may be a new crop of tiny seedling leaves around the base of the large mother plants. The appearance of new seedling leaves around mother plants each spring confirms that the fungal relationship is healthy. Seedlings take 3 – 5 years to reach flowering size.